Easter to Greeks is the ultimate religious celebration of Christ’s crucifixion as well as resurrection. Those visiting Corfu during the Greek Orthodox Easter will discover that the general mood escalates from solemn to joyous rapidly making the whole holiday a truly unique experience. Easter in Greece is generally a few weeks later than the western world due to the fact the church bases its liturgy on the Julian calendar, which means that visitors get to enjoy the sunny and warm weather of spring!

Corfu Town goes all out during Easter. Statues of St. Spiridon (the island’s patron saint) and the Virgin Mary are paraded through the town’s streets while local philharmonic bands, choirs, the clergy and the locals follow

Easter festivities commence on Palm Saturday. On this day, families traditionally gather together to make Easter treats like almond and honey cakes. On Holy Thursday, the town goes into mourning as the locals leave the church service and the bells ring mournfully symbolising the death of Christ.

The next day is when the Epitafios takes place, which is Christ’s symbolic funeral service. In the morning, the solemn toll of church bells wake up the local. In the afternoon, the main streets of the town boast with epitafious (either icons of Christ or wooden boxes decorated with flowers that symbolise the tomb of Christ). The last procession of the day starts at 10 in the evening, where the richly decorated epitafios takes the lead and the local brass and wind bands follow playing mournful music.

The following day is when the true festivities begin! At 11 am sharp the church services announce that Christ has resurrected and all you can hear is people calling Christos Anesti, meaning Christ has risen, and the joyful sound of church bells. Once Christ has risen, locals begin launching ceramic pots down into the streets as a sign of renewal. The smashing of pots, the sound of the joyous bells, the cheery crowds and singing choirs create a joyous disharmony all through the town.

The day has not ended though. During the night there is another service where all locals gather at Pano Plateia. At exactly midnight, Christ’s resurrection is once again announced and all those attending light up candles (lambades) with the holy light. Celebrations continue well into the night with fireworks that illuminate the sky and the burning of Judas, the traitor.

Easter Sunday is food day! Families and friends gather to enjoy a whole roast lambs and all the trimmings along with lots of wine and music! Happy Easter! 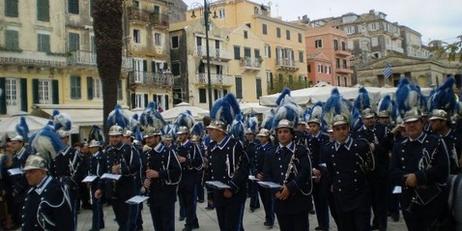 1-11
The “Protokyriakou” litany takes place every first Sunday of November in commemoration of the devastating pestilence of 1673 AD. The locals believe that the miraculous intervention of St. Spyridon cured all infected.

The following appeared on BostonGlobe.com

On another level, the series is a rich family portrait of widowed mother Louisa Durrell (Keeley Hawes) and her four idiosyncratic children. Based on the somewhat autobiographical Corfu trilogy by naturalist Gerald Durrell, who’s 11 when the action begins in 1935 England, the drama finds the depressed Louisa deciding to uproot her gang for a big adventure. The Durrells don’t talk much about their late father, but his absence has put them at financial and emotional odds in Bournemouth. He has left a giant hole in the family.

Louisa, lonely and exhausted by her kids, is sneaking gin. Gerald, the youngest, is obsessed with nature to the detriment of his schoolwork; at one point, we see Louisa telling off his teacher for caning her son. Lawrence, the oldest, is indiscreetly sleeping around and struggling to write (he will later become a celebrated author). Sister Margo is pathologically unmotivated. And brother Leslie is obsessed with guns. It’s time for a change.

On yet another level, once “The Durrells in Corfu” goes to Corfu, it’s about culture clash. It’s about what it takes for people from very different worlds to understand one another — and how valuable that kind of barrier-crossing can be. There’s a touch of “A Passage to India” in the story, with sensitivities and misunderstandings between the Durrell family and the Greek locals, including various men with whom the children are secretly setting up Louisa. Occasionally, the show, written by Simon Nye, reduces the Greek characters to little more than quaint locals; but on the whole they are well-developed, including the family’s friend and guide, Spiros (Alexis Georgoulis).

It all holds together nicely, as we watch the Durrells heal and the kids’ identities emerge once they get away from the cold British environment. What were character flaws back home become sweet eccentricities in Corfu. Early in the series, Louisa says, “We can’t just run away from our problems,” but in a way they do just run away, and in a way it does work. They thrive in new ways that are satisfying to observe, even when growing pains flare up. And Louisa, too, flourishes, a process given graceful shape by Hawes.

“The Durrells in Corfu” was a hit in the UK, and it has already been renewed for a second season. It’s not as finely observed as “Downton Abbey,” and its themes aren’t quite as ambitious. It can also be a tad precious. But there’s something pleasing about the way it captures a time of innocence and a family in recovery. If you like this kind of escapist fare — and you know who you are — then I expect you will savor this laidback, elegant entertainment.

MASTERPIECE: THE DURRELLS IN CORFU 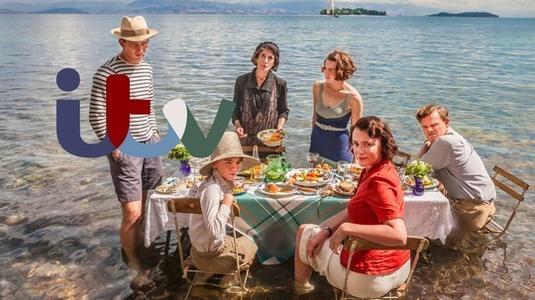